I think it’s always a good idea to take a step back and ask yourself why you’re doing something. So right now I’m taking a step back to rethink Warpspire.

Getting rid of cruft

The other day I followed a link to a blog post on Mint. I was presented with this screen: 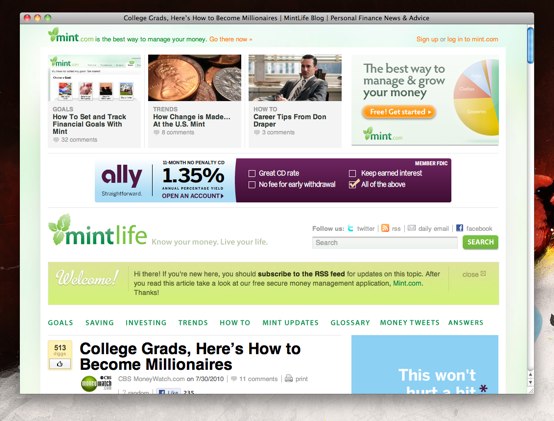 I hate what most designers have done to the web. You’d think people would be taking cues from things like Readability and Safari Reader, but they’re not. People are throwing more and more crap onto each page and making things harder and harder to read.

Anyways, it got me to thinking about sites that I continue to enjoy reading in the browser. One site that immediately came to mind is Daring Fireball. The format and presentation has lasted for years without feeling tired or hard to read. So it should come as no suprise that this new layout mirrors DF in a great number of ways. (Alas, my logo features the same unicode character as DF — something which has now turned from a funny coincidence to a long boring story. I hate logos.) 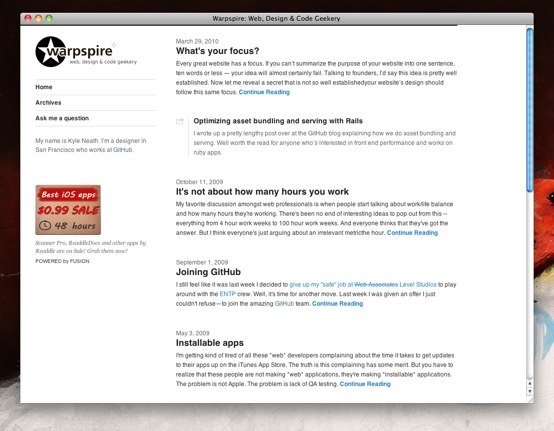 This new layout is the simplest layout I’ve ever had on one of my sites. The goal was to create a focused place for my ideas.

There was a lot of crap on Warpspire. WordPress tells me the first post was published August 15, 2004. That’s six years ago. To say that the web is a different place now is an understatement. I remember debugging that initial site on IE5 for Mac. Six years ago, I was in my 2nd year of studying Civil Engineering at Cal Poly. I had no concept of the value of the web or how important it would be come. I was also twenty years old, angsty and wrong about many things.

So I deleted most of my posts.

What’s left? The most popular posts (traffic wise) along with a couple of ones that I particularly enjoyed and still felt relevant. I’ve also edited them all, and rewritten some.

Almost certainly a bad idea for my traffic, but probably a good idea for my readership. And I’ll value readers over pageviews any day.

On the subject of comments

The thing about comments is that commentors tend to be a bunch of crazies wandering the internet like it’s a zombie apocolypse. It’s a striking contrast to the rational human beings whom I have sensible arguments with here in the meatspace.

The thing is, I’ve met some of the smartest people on the planet through my site and I don’t want to lose that. So here’s the deal: you send me email, and I send you one back. If I think others might be interested in what you have to say, I’ll post it here on Warpspire.