If you’ve spent any time looking into climate change, you’ve heard a lot about emissions. Climate change is fueled by our emissions of greenhouse gasses and we must reduce our emissions to avoid disaster. Disaster is usually spelled out in some degrees of warming, usually 1.5˚C or 2.0˚C. In order to avoid this disaster, we are given two actionable items: 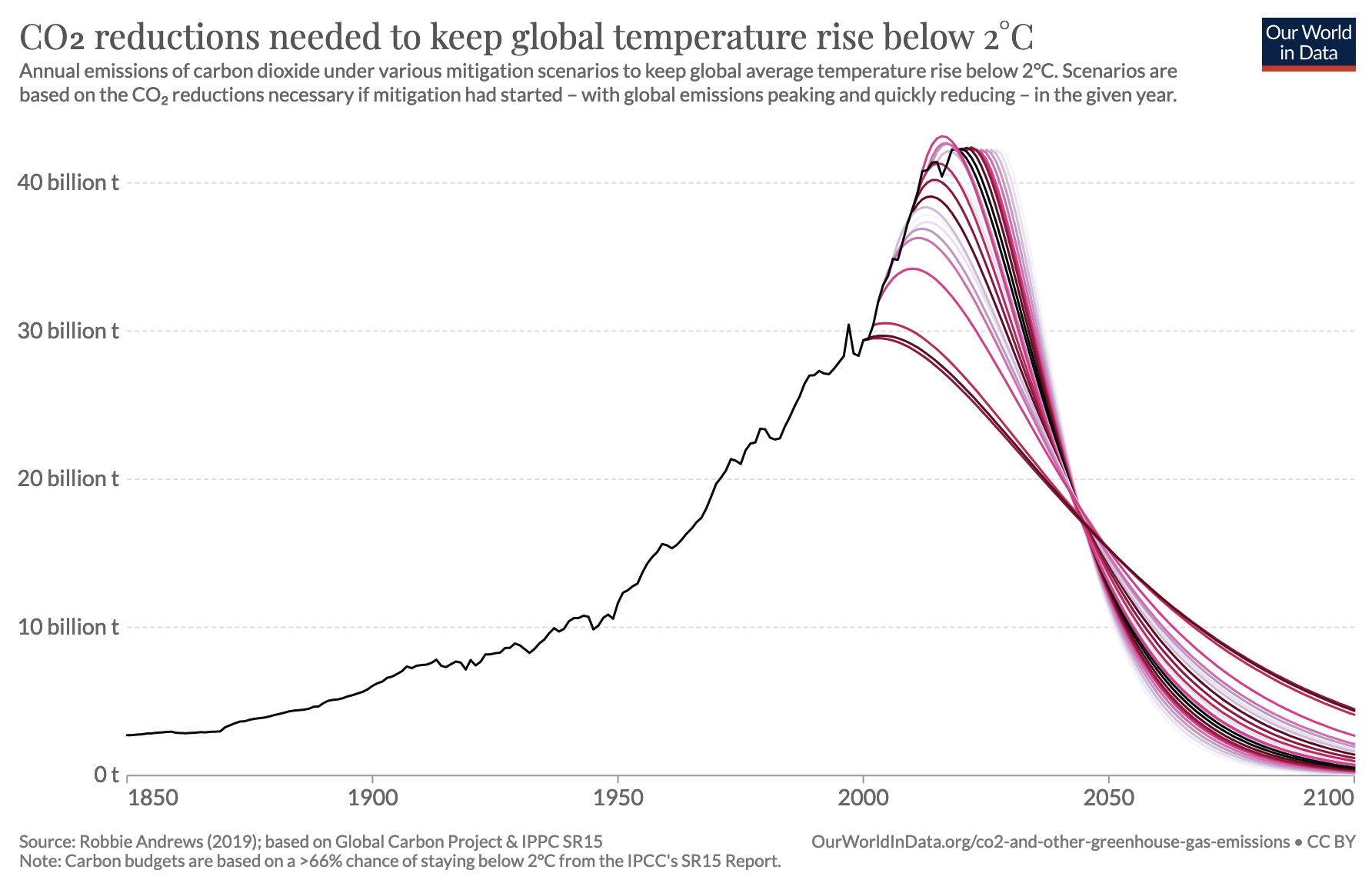 It doesn’t take much critical thinking to realize something pretty quickly: none of those projected curves are actually going to happen. We haven’t even started pointing the graph downwards yet. We will not decarbonize the entire world in a few decades.

So — okay. We aren’t going to limit warming to 2˚C by reducing emissions. What are our options? The next thing you’ll hear is carbon capture and carbon sequestration. Plant more trees, install CCS (Carbon Capture and Storage) devices on natural gas plants, build DAC (Direct Air Capture) machines to suck CO2 out of the air. We’ll create a negative component to the chart that adds a possibility for positive emissions to be balanced by the negative emissions of carbon removal — reaching something we call net-zero emissions.

Unfortunately, planting more trees and other natural sequestration solutions aren’t a path out of this. At best, that sequestration happens once. If we reforest a region and it sequesters a few gigatons of CO2, that forest doesn’t keep regrowing year after year — it is a one time offset. At worst… how much carbon does a forest sequester once it’s burned down? We need a way to capture and sequester emissions on an ongoing basis. That means CCS and DAC.

Across the globe in 2020, we captured and stored 0.000009 gigatons of C02 with DAC and 0.04 gigatons of C02 with CCS. In order to capture half of our current emissions, we’d need to be capturing around 20 gigatons per year, or 500 times our current CCS capacity and 22 million times our current DAC capacity. But this is only part of the story — the vast majority of that captured carbon was used for EOR (Enhanced Oil Recovery). In other words: the only realistic implementation of carbon removal so far is to extract fossil fuels that would have otherwise been unprofitable to extract. I wouldn’t call that negative emissions.

It’s pretty clear that carbon capture and sequestration on the scale required to limit warming to 2˚C isn’t going to happen.

The Cure is Also the Problem

Reducing our current emissions to zero is only half the struggle. We also need to find a way to compensate for the emissions needed to get to that decarbonized future.

We all agree that we need to replace our gas powered cars with electric cars, replace our coal energy plants with nuclear and renewables, and so on and so forth. But building electric cars, nuclear power plants, and solar panels emits CO2 in the process. Electric cars require batteries that use materials mined with diesel tractors. Nuclear power plants are made of an incomprehensible quantity of concrete. Solar panels require aluminum that must be smelted from ore. This list goes on and on. It’s going to require an incredible amount of emissions to build the infrastructure we need to reduce emissions.

At the same time, all around the world people are escaping poverty, moving into the middle class, and generally improving their standard of life. That means more apartment complexes, more iPhones, and more foam mattresses. All of which cost emissions to make.

We cannot ethically or reasonably deny these things to the developing world. Thanks for letting us burn fossil fuels to get where we are! Now you need to lift yourself up without creating any more emissions — that good? The idea is unconscionable and counter-productive. If we want to solve the emissions problem, we’re going to need the cooperation of the entire world. Subjugating the majority of the world’s population into poverty isn’t going to cut it.

We aren’t going to limit warming to 2.0˚C through emissions reduction, and there isn’t a credible reason to believe we have a path to reduce emissions at all over the next few decades. The gap between what is necessary and what is feasible is so large as to be effectively meaningless.

Do you know how many footsteps it would take to walk from the Earth to the Moon? Would having that answer get you any closer to the moon? That’s the kind of gap we’re talking about. We are talking about an entire restructuring of the world’s governments, industry, financial systems, agriculture, transportation networks, and every single human’s way of life. Oh — and the complete dismantling of every country’s war machine. It’s not worth investigating because there is no way it will happen in time to prevent warming in the way our charts imagine, just as you will not be walking from the Earth to the Moon no matter how many footsteps it measures out to be.

The above conclusion can be pretty depressing. Doesn’t that mean the world is ending? No. It’s not. But our current paradigm surrounding climate change is in need of serious repair. I’m often reminded of something an old rancher once told me when I was trying to figure out how to fix the dirt road to my off grid property: sure you can fix the road, or you can just buy a bigger truck.

Reducing emissions is incredibly important. We have to find a way to decarbonize our way of life if we want to life comfortably on this planet. But we aren’t going to combat climate change in a meaningful and timely way focusing on emissions. We need a solution to the emissions problem, but it isn’t going to be our answer to climate change. Not in this century.

Once I freed myself from this obsession of solving an unsolvable problem, I realized that the emissions paradigm had been an immense burden. How can it not? The only effective way to reduce your emissions to zero is to cease being. The only way to reduce our world’s emissions to zero is through world wide revolution toward…. something else we only have faint ideas about? What’s worse — this obsession with emissions blinded me from possible solutions. If we take it as fact that emissions will continue to rise over the next hundred years, what are our options? What’s our bigger truck version of combating climate change?

We have to break out of our current paradigm.

I believe our most viable tools in combating climate change revolve around resilience and mitigation.

Resilience is adapting our infrastructure to live in a world of changed climate. It means building houses that suffer floods and wildfire undamaged. It means neighborhoods built so that neighbors can support each other. It means levees seven stories high and tractors that work in deep mud. It means energy systems that continue to function even as the grid fails, purification systems for contaminated water sources, and air handling systems designed for toxic air.

Mitigation is a different thing. It means reducing warming even as emissions rise. It means solar geoengineering, cloud seeding, and a variety of other incredibly uncomfortable ideas. It’s scary and full of terrible outcomes. But I believe it’s a necessary and inevitable step to buy us time while we work on the emissions problem. Inevitable because solar geoengineering isn’t that expensive and most companies / countries have the means to start a project. Rogue geoengineering will absolutely be a thing. It’d be nice if it wasn’t rogue.

These are no small tasks. We’ll need to change the way we think about housing, transportation, land ownership, food, energy, and what “the environment” means just to live in the world that exists today. But these ideas are far more approachable than avoiding climate change with emissions. I can imagine a house built to survive a wildfire. I cannot imagine every single government, industry, and human on earth voluntarily changing their way of existence in order to to reduce emissions to zero, then negative.

I’ll say it again: reducing emissions is incredibly important. We have many viable paths to do this! We just don’t have any paths that work on our given timeline. So I look at emissions as a research project — probably the most important research project of our generation. We have to decarbonize our way of life. We have to build an industry of carbon removal. We have to remember that every pound of CO2 we fail to emit is one pound less to be removed in the future. Paving a path toward solving the emissions problem will be our gift to the children of 2150.

So I’ll keep my subscriptions to Climeworks and Tradewater to buy back the carbon I emit. I’ll invest in Regenerative Agriculture and novel uses of farmland. I’ll continue giving to Carbon 180, Clean Air Task Force, Cool Earth Action, Project Drawdown, Protect Our Winters, Sierra Club, Trees for the Future, and other emissions focused organizations. I’m not giving up on the most important research project of our lifetime.

But I’m not going to pretend this will have any effect on the challenges of my generation, or even the next. It means I’m going to tell you that the important part of my new house isn’t the electrified induction cooktop — it’s the HEPA filter and backup batteries. And I might even fly on an airplane or three and find joy in life without measuring every gram of carbon I emit.

Our way forward is through a changed climate. We can’t keep pretending there is some mythical singularity at 2˚C we can prevent with emissions control. We already live in a changed climate. It’s time we acted as though reality is real.