Hi, my name is Kyle Aster (previously Kyle Neath). Warpspire has been my home on the internet since 2003.

It’s probably easiest to start here: I’m retired. More or less. I shouldn’t need to work for anyone ever again. But I keep busy. Right now I’m focused on investing in my local community: nonprofits, locally owned and operated businesses, and property development. I’m also building a house.

Every few months, I send out an email newsletter about my personal life. I call Seasons of Kyle.

I used to do a lot with computers

I don’t remember a lot about how I became interested in computers. I just remember them always being around. I remember my elementary school had a computer lab full of Apple IIs for us to play educational games on. I remember playing Number Munchers. I remember Pizza to Go. I also remember the school getting a grant to have an internet lab around 1993. We would download recipes from Gopher and spend hours downloading images from Hubble with Mosaic.

By the time I was in middle school, I was fascinated with websites. I’d build silly pages dedicated to Warcraft II on Tripod and Angelfire. Made with Mac GIFS, keyword stuffing and all. By high school (~2000) I was building websites for more serious subjects: non-profits and my Dad’s construction business. My first paid gig was photographs and a website for poisonous lizards. Yes, they tried to bite me.

In 2001, I became obsessed with Utopia and Dominion. Little online turn-based strategy games that required you to log in every hour to play your turn in real time. They really fucked up my sleep schedule. But that’s why I picked up my first programming language. ASP 3.0. I started to build my own game with a couple of people I’d met on IRC. We called it Nightfire, and we never finished it. But it was the motivator to learn all about databases, server-side programming, and HTML & CSS.

Fun fact: Nightfire was actually the origin of this domain, warpspire.com. Blame 13 year old Kyle for why it doesn’t make any sense.

By 2004, my tuition had quadrupled and Arnold Schwarzenegger was now my governor. So it goes.

So when I wasn’t in class, I kept building websites. I built websites on contract. I maintained websites for hourly wages. I built Amazon, Musician’s Friend, and Zzounds affiliate websites. I built Wordpress themes and made money off Dreamhost affiliate links. I made money online. I built and re-built my blog a dozen times. And along the way I learned all manners of web technologies. I had a firm grasp on HTML, CSS and web standards. I could write enough PHP to do just about anything I could imagine. And I was almost making enough money to pay my ever-increasing tuition (and books, and rent, and…). I also got a job at Subway. So it goes. 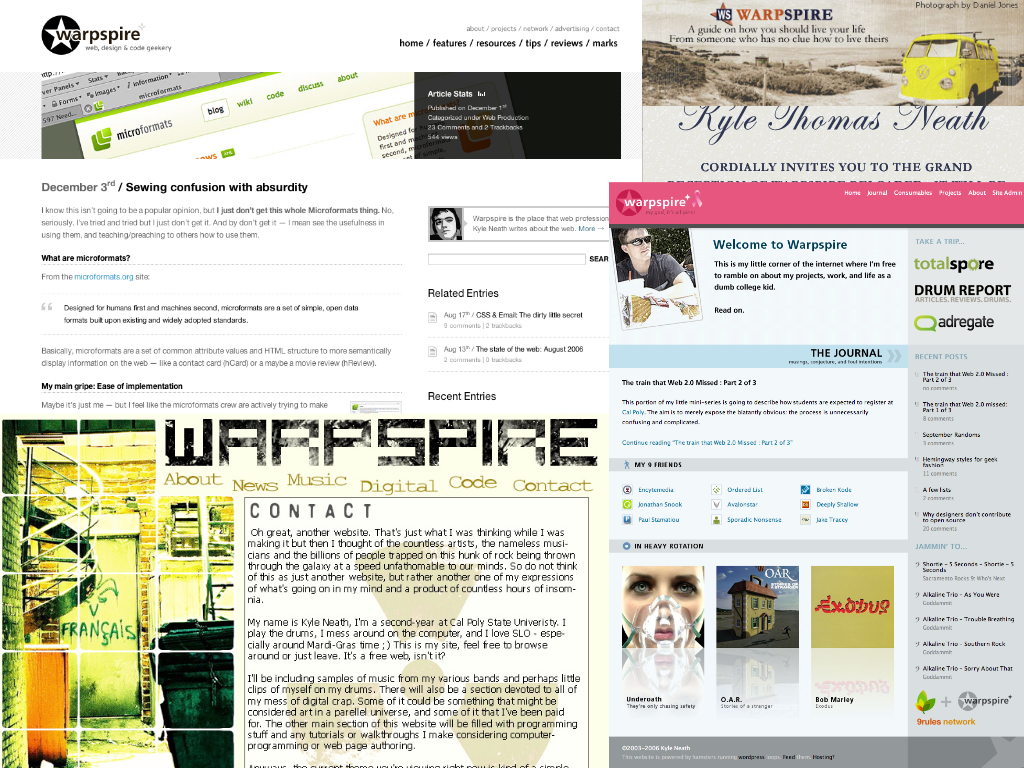 This is all to say, I never really had a plan. I just wanted to make rent and stay in school.

Some time in 2004, Web Associates called me up for an interview and offered me $12/hr for as many hours as I could work. I was ecstatic. I had extra money. I spent the next 4 years there working on projects for Apple, RIM, Oakley, Disney, Motorola, and Hewlett-Packard. I built things in ColdFusion, Java, and ASP.NET. I fought the demons that live inside IE 5.5 for Mac. I built things with tables, CSS, validated XHTML and poisoned them all with applets, Flash, and DirectX plugins. I became an expert in WPF and finally learned what an easing function was. I helped build a monstrosity of ColdFusion and Java that spat out XML and shoved it through XSL to produce bastardized XHTML in order to sell more wine to middle-aged single women who were drawn to the color purple. Or so said the branding department.

But all those moments are lost in time, like tears in rain.

By the time I graduated with my degree in Civil Engineering in 2007, I realized something: I enjoyed this job, I liked the people I was working with. So I filed my degree away and decided to keep doing this computers thing.

In the end, big agency life wasn’t for me. I left Web Associates in 2008 and worked at a small consultancy named ENTP led by @court3nay (who I’d met through #caboose). I worked on a mix of client work and product development during my time there. Most notably working with @technoweenie to design, build out, and grow the first version of Tender. 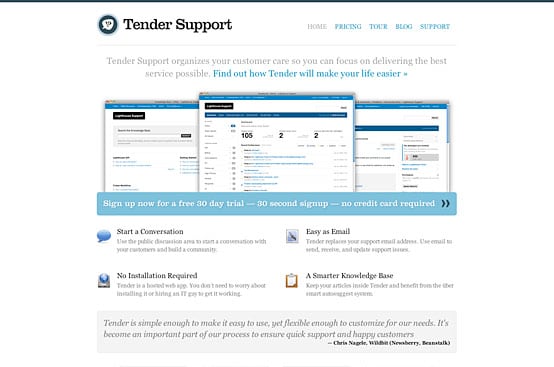 In 2009, I moved to San Francisco and through old 9Rules and #caboose connections I ended up getting a job offer from GitHub. That kind of set the tone for the rest of my professional career. It was the epitome of what I wanted to work on: full time on a product funded by subscriptions, not ad revenue. And so the next five years of my life got absorbed in building out the company and the product that everyone now knows as GitHub. 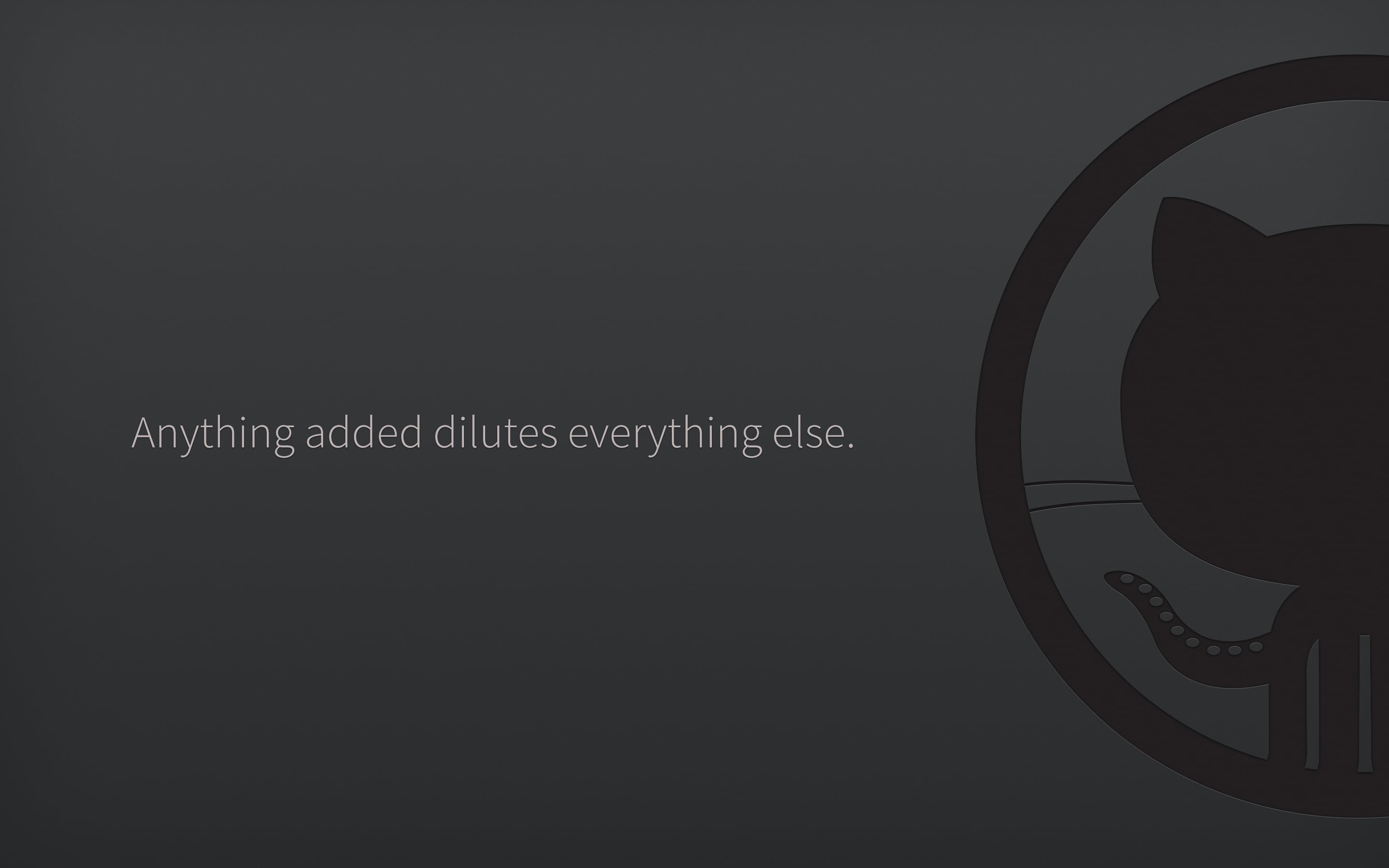 In 2014, I left San Francisco and GitHub. My dad was suffering from cerebellar ataxia, and I felt it was more important that I help care for him. It wasn’t how I expected to leave, but in the end I think it was good for me. I loved GitHub, but I just wasn’t built to thrive in large organizations.

Lucky for me — that whole GitHub thing ended up being pretty financially lucrative. It’s allowed me to reach escape velocity from capitalism and ask myself what exactly is it you want to do with your life? 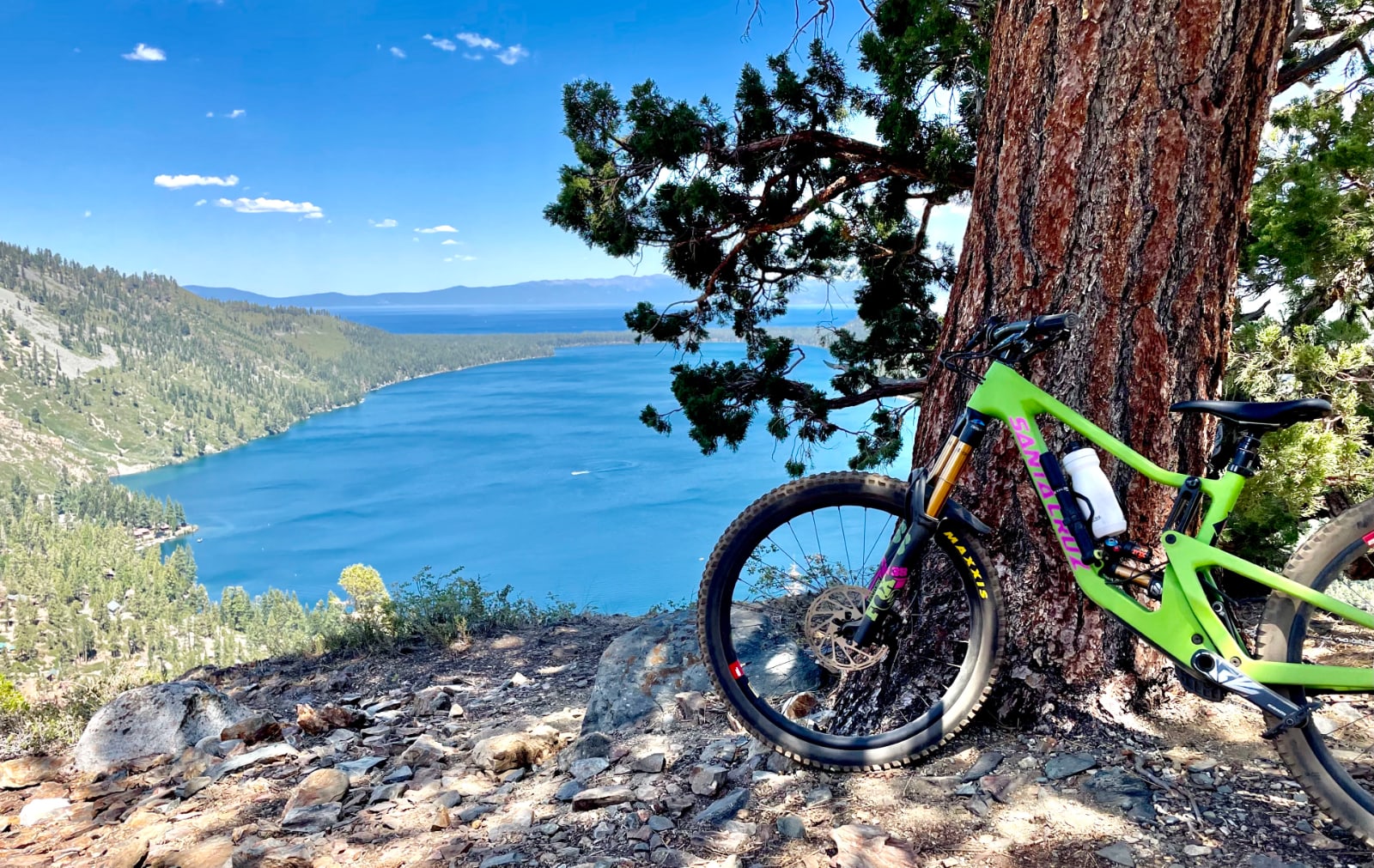 I’ve slowly come to the realization that I kind of don’t care about Building Stuff With Computers any longer. I’m done cranking. I spend a lot of my time enjoying the mountains and pursuing things that bring me joy. Professionally speaking, I’ve turned my focuses more local and more physical — investing in local businesses and trying to make South Lake the best little mountain town it can be.

Jessica and I are also trying something new: commercial property development. Planning department willing — we’ll be turning an old gas station into a beautiful cafe built for people, bikes, and all manners not-just-bikes.

We’re calling it A Gas Station For The Future.

Stuff I built with computers

I’ve been able to work with some seriously smart individuals throughout my career, and as a result, I’ve been a part of some really exciting projects. These are some I’m most proud of.

GitHub had pull requests well before I joined, but at the time they were little more than a button that sent a message. I was able to pair up with @rtomayko and @schacon to revisit pull requests and make them first-class citizens in the product.

We looked at some commonly used strategies for reviewing code in Git, and tried our best to marry them to GitHub’s collaboration & discussion features. We shipped the foundation for pull requests with Compare View, and iterated on our ideas until we ended up with first-class pull requests: Pull Requests 2.0.

To this day, Pull Requests are my favorite thing I’ve ever worked on. It was incredible watching the feature grow from our need for better code review to the power-house feature that sits at the core of GitHub today.

When I joined GitHub, the site only allowed personal accounts. My first big project was tackling the design for Organizations — our answer to shared accounts for businesses and open source teams.

Organizations were more successful than I would have imagined, and grew into one of the most critical features of the site, having a tremendous impact on the growth of the business along the way.

We knew early on at GitHub that one of our biggest barriers to growth was the same force that fueled so much of our growth: Git. Git was designed first and foremost for the command line — and the command line can be a scary place. As time went on, it became more and more obvious that we needed to solve this problem ourselves. This is how the idea for GitHub for Mac was born.

I was fortunate enough to work along side @joshaber to build out 1.0. You can read more about that process in my article Designing GitHub for Mac.

Early on, we explored a few different ideas for companion products to GitHub, one of which was trying to connect employers with developers seeking work. I worked with @pjhyett, @defunkt, and @rtomayko to design, re-design, and ship the first version of GitHub Jobs.

Jobs ended up being one of the more interesting products I’ve worked on for an odd reason: I think it might be the most efficient software project I’ve ever participated in. We were able to build out the initial version in just a couple of weeks, it required very little maintenance, and enjoyed a lasting success. It’s not the most ground-breaking product, but not everything needs to be.

As the company grew, my focus shifted from development to building out our design team. This shift inspired KSS, a tool to document CSS and automate the creation of style guides. KSS has gone on to become much more popular than I’d imagined, and is by far my most popular open source project (even eclipsing Hemingway!).

And that’s a lot to read. I really hope you skimmed most of it. Just in case you didn’t and still want to know more, feel free to hit me up at kyle@warpspire.com.

If you suffer social media, you can usually find me as @kneath.